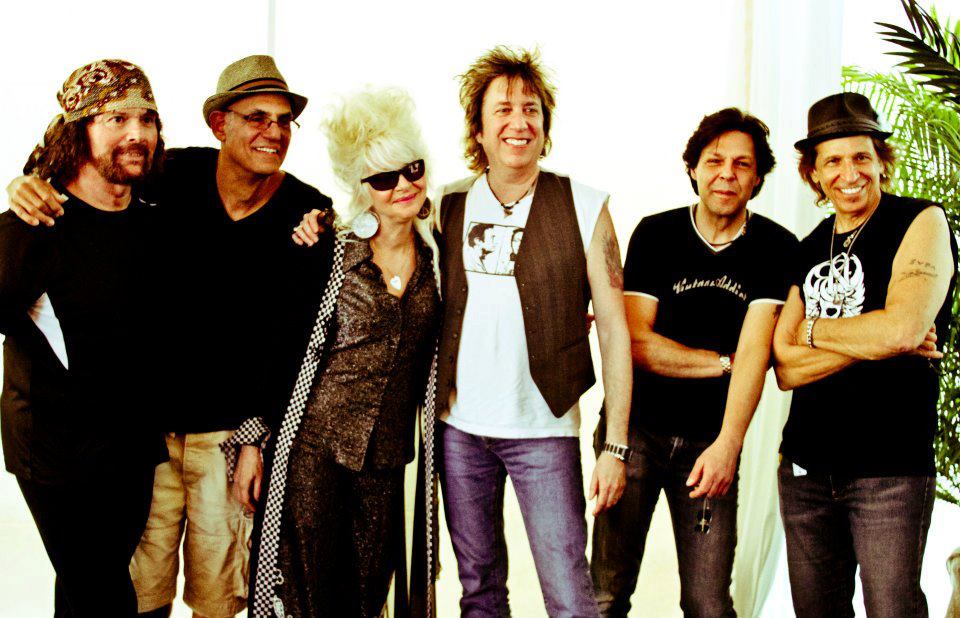 Richie Supa
Richie Supa is a New York singer/songwriter with over 300 songs recorded and four solo albums to his name. Richie’s career was launched via the legendary Long Island Band “The Rich Kids” who were signed by Clive Davis to Columbia Records. Richie was a staff writer at EMI Music for eighteen years and went on to a career on Broadway where he had the lead role in the hit musical “HAIR”. He became a household name in the Northeast which helped to launch his now 40+ year career. Artists who have cut his songs reads like a who’s who of the music industry, with over 50 million records sold. Artists who have recorded Supa’s songs include Bon Jovi, Aerosmith, Ozzy Osborne, Mika, Pink and legendary artists such as Johnny Winter, Levon Helm, Tom Jones, Air Supply, Glen Campbell, Willie Nelson and Richie Sambora to name a few. Richie’s songs have appeared in Disney movies, feature films and on network television, including the hit show Melrose Place. Supa has been a behind-the-scenes voice in the legendary rock band Aerosmith for years, including being a touring member. He co-wrote several of their number one rock hits including “Chip Away The Stone”, “Lightning Strikes”,“Amazing and “Pink” which won a Grammy. His songs ” In The Rooms” and “Last House On The Block” were nominated and won BEST SONG Of THE YEAR at the 2009 and 2011 PRISM AWARDS in LA.

Kasim Sulton
Singer/songwriter Kasim’s performance bio reads like a who’s who of notable musicians in rock history. Todd Rundgren, Utopia, Meat Loaf, The New Cars, Hall & Oates, Bon Jovi, Joan Jett, Mick Jagger, and Celine Dion are just a few of the performers to have benefited from Kasim’s musical abilities. From playing small clubs in his native New York, to performing on Broadway in Movin’ Out, to selling out Wembley Arena in London with Meat Loaf, there isn’t much Kasim hasn’t seen or done in his varied 30 year musical career. While Kasim has spent much of his time contributing to others work, he has also been cultivating a successful solo career, releasing three solo albums and delivering memorable solo performances over the years. Connecticut’s Today newspaper writes Kasim Sulton is an accomplished songwriter, producer, bassist, guitar player, keyboardist, and has the voice of a happy angel. Kasim’s latest All Sides features several new songs, live tracks and some of the best of his first three solo albums. His previous solo album Quid Pro Quo won the Kweevak Viewers Choice Award in 2003. Always entertaining, Kasim fills his acoustic sets with great music and his tales from the road give his audience a look at life with the sometimes rich and famous. Visit HYPERLINK “http://www.kasimsulton.com” www.kasimsulton.com for more information about Kasim Sulton and his music.

Liberty Devitto
Liberty has never won a Modern Drummer Magazine readers poll, but today his drum parts are being duplicated on Broadway and in theaters all around the world. Just pick up one of the 150,000,000 copies of Billy Joel records sold in the last 30 years and hear why he is called “the songwriters drummer.” Two songs that stand out are “Scenes from and Italian Restaurant”, and “New York State of Mind” which was a song of encouragement after the tragic 911. Spanning his career, Liberty has played with Sir Paul McCartney, Stevie Nicks, Sir Mick Jagger, Roger Daltrey, Ronnie Spector, Karen Carpenter, Phoebe Snow, Sir Elton John, Meatloaf, and many, many more. In 2013 he was inducted into The Classic Drummer’s Hall of Fame. By the age of 18 he was on the road with Detroit rocker Mitch Ryder banging out Mitch’s hits, “Jenny Takes a Ride”, “Devil with a Blue Dress” and “Sock It To Me Baby.”  Right after Mitch Ryder, Liberty got a gig with Long Island alumni, Richie Supa, and had his first recording experience. The album “Supa’s Jamboree” was recorded in Atlanta, 1969-70, and was produced by Buddy Buie of the Classics 4 and Atlanta Rhythm Section Fame. The album was released on Paramount Records and a tour immediately followed. Liberty was driving the equipment van from Cleveland, Ohio, back home to Long Island when the van hit black ice and flipped off the side of the road, rolling four times. Liberty had sustained serious injures, which brought him a year of not playing the drums. To ease back in, he took a steady gig at a catering hall on Long Island. During those years, the group “Topper” was formed. A club owner once called Topper, “the worst band to ever play his club.” Topper eventually became Billy Joel’s band. In 2014, this band will be inducted into the Long Island Rock ‘n’ Roll Hall of Fame.  Thirty years with Billy Joel, and countless other projects, Liberty is still going strong. He can be seen live with his Brooklyn, New York based rock and blues band, “The Slim Kings” who are working on their sophomore album, following their successful first album and single, “Waterloo,” which was released on charity CD “Songs For Sandy II” along with releases from Paul McCartney and Dave Stewart. The band recently supported ZZ Top and South Side Johnny on their area gigs. Liberty continues to lecture and play all over the world, from Krakow, Poland, to Beijing, China to Santiago, Chile and everywhere in between. He has played with English Invasion icon Billy J Kramer since 2005. Liberty is an honorary Board Member of New Jersey based, “Little Kids Rock,” a non-prof organization that puts instruments and music programs in underserved public schools worldwide. Beginning with 20 children, it now services 180,000 kids each year, Liberty is the house drummer for the LKR Gala, driving the beat for such performers as Bruce Springsteen, Tom Morello, Elvis Costello, and many others. Liberty is a member of “The Recovery Squad,” a band and program dedicated to rock ‘n’ roll and sober living. Part of many more projects than can fit here; he remains a band member for The Rock and Roll Hall of Fame Foundation, lectures for Sticks and Skins and The Sessions, and is a founding member of The NYC Hit squad. Liberty currently resides in Brooklyn, New York. He loves what he was born to do, DRUM.

Mark Stein
Lead vocalist, keyboardist, composer, and arranger of Vanilla Fudge.  Mark first founded Vanilla Fudge in 1966 at the age of 18 with members Tim Bogert, Vinny Martell, and Carmine Appice. In the short time they were together the band enjoyed their first giant success with their first Atco album release self-entitled Vanilla Fudge. VThe first album was a groundbreaking work since it was the first album to reach the top ten on Billboard’s charts without a hit single. The legendary rock arrangement of You Keep Me Hangin’ On became the bands first hit single nearly two years after the release of the first album.

During the 1960’s the Fudge were one of rock’s most exciting, high-energy touring bands, setting the stage for the likes of Jimmy Hendrix, Deep Purple, and even Led Zeppelin. Through a total of five albums and the tireless touring, the legendary Vanilla Fudge influenced artists around the world with their inspired performances and unique musical interpretations. Bands like Yes, The Who, Deep Purple, and many others have credited Vanilla Fudge with having a profound effect on their music, and the overall musical renaissance of the late ’60s. The band’s influence is still felt even today.

After the demise of the Fudge in the spring of 1970, Mark took a hiatus from the ‘Rock Wars’ and decided he wanted to develop his writing and playing skills even further. After flirting with a solo career where he had a single released in England on the Phil Spector International label he resurfaced with The Tommy Bolin Band in the mid 70’s. This was a highly regarded group that had the likes of Narda Michael Walden on drums, Reggie McBride on bass, Norma Jean Bell on sax, and Mark on keyboards and sharing vocals with the great Tommy Bolin. The Tommy Bolin Band was a high energy rock-fusion influenced band that attracted people like John McLaughlin, Jan Hammer, and Jeff Beck, to name a few, to come see the band play live. It was during this time that Mark made the transition from the Hammond B-3 organ to synthesizers. Mark toured and recorded with Bolin (then Private Eyes album), and left the Bolin band just prior to Tommy’s premature death.

After working on several writing projects, Mark joined Alice Cooper in the “Welcome to My Nightmare” show, and toured Australia and New Zealand. Upon his return to the states he hooked up with Dave Mason who produced Mark’s solo album on CBS Records in 1979. Mason then asked Mark to join forces with him and Mark toured and recorded with David for the better part of four years. Mark penned five tunes on Mason’s Old Crest on a New Wave album, and sang backing vocals with Michael Jackson on the track Save Me.

In 1983, Mark re-signed with Atlantic Records to do a Vanilla Fudge reunion album entitled Mystery, appearing once again as lead vocalist / keyboardist. In 1987 the Fudge did a three-month U.S. tour, and recorded a ‘live’ album “The Real Deal “during some of those dates. The band appeared at the Atlantic 40th Anniversary show May 14, 1988, at Madison Square Garden in New York.

Mark released his solo CD entitled “White Magik” with his all star band Jimmy Haslip (Yellowjackets) on bass, Bobby Rondinelli (Black Sabbath) on drums, John McCurry (Paul McCartney/Julian Lennon) on guitars and Jim Campagnola (Eric Clapton/Natalie Cole) on sax. which was released in tandem with the live Vanilla Fudge Live CD “The Real Deal”. Mark then joined the 2005-2006 tour with The Fudge sharing the bill with The Doors of The 21st Century, Steppenwolf, The Yardbirds, and Pat Travers.

Mark is also very proud to be a part of “Clean Getaway” with other amazing Artists Richie Supa (Aerosmith),  Christine Ohlman (SNL Band), Liberty DeVitto (Billy Joel) (The Slim Kings), Ricky Byrd (Joan Jett & The Blackhearts), (Roger Daltrey) and Kasim Sulton (Todd Rundgren), (Meatloaf). On October 15, 2006, Mark & the Vanilla Fudge were inducted into the Long Island Music Hall of Fame by Felix Cavaliere for their contribution to music history. Other inductees were Billy Joel, Joan Jett, and Twisted Sister along with others. In 2007, Vanilla Fudge recorded a tribute to Led Zeppelin “Out Through the in Door” which was never released on a label in the U.S. Marks & solo band were featured on a PBS TV Fundraiser “The 60’s My Generation” which continuously airs on PBS nationwide. Mark released his self published book “You Keep Me Hangin On” which is available on Amazon.com and an autographed copy from his website www.mark-stein.com. He just returned from a 3-week tour of Europe.  Vanilla Fudge will be performing at The Suwalki Blues Festival in Poland in July.