Who Are We? We are families who have been ripped apart by opioids. We have lost loved ones to death or addiction. We are medical experts and advocates who understand that the root cause of the problem is overprescribing.  This is a grassroots coalition, all seeking action from the federal government to bring this public health crisis to an end.. We accept no money from pharmaceutical companies or their affiliates and 100% of the donations we receive are directly applied to managing the costs of holding our Fed Up! Rallies and coordinating our advocacy efforts. We are beholden to no one – except our lost loved ones, or our family members struggling with addiction. We have come together to save lives.

OUR MISSION: To use our united voices in a call for immediate, comprehensive and sustained Federal action to end the opioid addiction epidemic.

OUR VISION: A world where opioids are prescribed cautiously and those with opioid addiction have easy access to effective treatment and recovery services.

OUR VALUES:  1) The FED UP! Coalition does not accept financial support from manufacturers or distributors of opioid medications or from providers of addiction treatment services that do not offer evidence-based treatment.  2) The FED UP! Coalition is nonpartisan, inclusive and welcomes as members all individuals, organizations and agencies that support its mission and its platform. 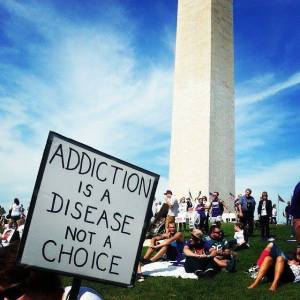 The History of FED UP!

The FED UP! Coalition was formed in 2012 when several organizations from across the country joined forces. What brought us together was our shared concern that the federal government was failing to stem the rising tide of opioid addiction and overdose deaths. We were especially frustrated with the failure of FDA to correct a mistake in the Controlled Substances Act which had misclassified drugs containing hydrocodone as Schedule III (instead of Schedule II where they belong) and by FDA’s approval of a steady stream of dangerous new opioids.

Our first rally was held on Capitol Hill in the fall of 2013, about nine months after the FDA’s scientific advisory committee had voted in favor of moving hydrocodone combination products into the Schedule II category. We were especially FED UP that after 10 years of blocking the DEA’s effort to up-schedule hydrocodone products, FDA was continuing to stall by failing to act on the recommendation of its advisory committee. Many of the speakers at the FED UP! Rally, including a prominent group of Bi-partisan members of Congress, such as Chairman Hal Rogers, Senator Chuck Schumer and Senator Joe Manchin, urged the FDA to listen to its scientists and some even promised to call for an investigation of FDA.

Three weeks after our rally, the FDA finally announced that it would support up-scheduling. We believe that was it not for FED UP!’s effort, FDA may have gone against the recommendation of its scientific advisors- which is exactly what FDA did when it approved Zohydro, an easily crushed high dose hydrocodone product.

The second FED UP! Rally was held on the Washington Mall in 2014 and included a march to the White House. Many speakers at the rally criticized the Obama administration for ignoring the worsening epidemic of opioid addiction and overdose deaths and for the weak and ineffective response from some of his agencies. On the day after the rally a small group met with the White House Office of National Drug Control Policy to directly share their concerns with the Director, Michael Botticelli. Several weeks after the rally, for the very first time, the White House announced that it would seek $133 million in federal funding to assist states and counties in tackling the epidemic. Considering the magnitude of the crisis, $133 million was a shamefully small figure, but at least was a start. Without the efforts of FED UP! and the thousands who rallied and marched to the White House that fall, this small but significant achievement may not have occurred.