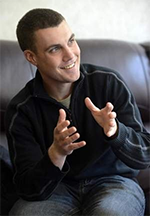 Greg Williams is a person in long-term recovery from alcohol and other drugs since age seventeen. He is a health policy advocate, and award-winning documentary filmmaker who specializes in the creation of compelling and purposeful content. At age 30, “The Anonymous People” is Greg’s first independent feature-length film. His new film is bringing lasting solutions to the screen for one of America’s top health problems. Currently in early theatrical release, “The Anonymous People” has already received widespread critical acclaim and a variety of industry awards.