The last few months have certainly demonstrated the real inadequacy of the Federal Government’s efforts in dealing with the epidemic of opioid addiction. The worst news has been the ongoing escalation in opioid overdose deaths. 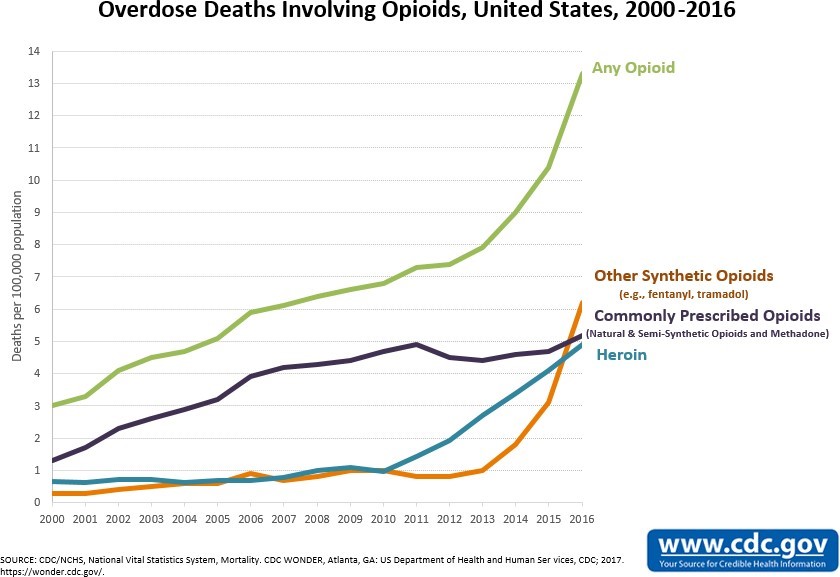 At the core of this rapid escalation in opioid overdose deaths is fentanyl. About eight years ago Mexican cartels began to import illegal fentanyl from China and added fentanyl to heroin to boost the potency of heroin. Fentanyl is 50-100 times stronger than heroin, and users have no way to know how much fentanyl has been added to their heroin, or whether their entire heroin dose is in fact fentanyl. Heroin has always been a dangerous drug, but as fentanyl-laced heroin became common, the death rate for heroin users tripled. 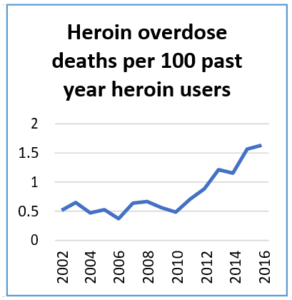 Furthermore, between 2015 and 2016, deaths due to fentanyl and analogues more than doubled from 9,945 to 20,145, and more opioid deaths in 2016 involved fentanyl than either prescription opioids or heroin.

We have known for some time that some amount of fentanyl is sent to the US directly from China, but it’s been thought that the vast majority of fentanyl is brought into the US by Mexican cartels.

But in January of this year, the Sen. Portman’s Permanent Committee on Investigations reported results of a year-long study showing that fentanyl is as easy to order from the internet as any other product, and that fentanyl ordered over the internet is delivered primarily by the US Postal Service. It is possible that more fentanyl is entering the U.S. by the mail than from Mexico.

His committee is now involved in a big push to require the USPS to obtain electronic shipping information with names and addresses of senders and receivers of international parcels and to automate the process for turning over targeted packages, and has called Customs and Border Patrol to ramp up the number of packages it targets for inspection, with an emphasis on illicit drugs. The Committee has stated that these programs might require extra resources for both agencies, and has directed Congress to further examine and address those funding needs. The urgency of the need and the bipartisan support should mean that we will see significant improvement in this area.

Sen. McCaskill’s report followed payments made by five manufacturers from 2012 to 2017 and found that they had made more than $10 million in payments to pro-opioid public advocacy groups and affiliated physicians.

While Sen. McCaskill’s report is quite important, the results of an even more important investigation have never been released. In 2012 the Senate Finance Committee spent months investigating whether several important groups involved with determining policy regarding opioids were impacted by financial support from opioid manufacturers. Among the organizations were the Wisconsin Pain and Policy Study Group, the Joint Commission on Accreditation of Healthcare Organizations, and the Federation of State Medical Boards.

There has been a good deal of talk from the Administration about opioids. Extending the Public Health Emergency in January, the White House declared, “By declaring the opioid crisis a nationwide public health emergency, the President has used the bully pulpit to bring national attention of this critical issue to not only everyday Americans, but also Members of Congress, state and local officials, and his entire executive branch, who have the necessary tools and authorities within their agencies to address this crisis.”

The problem to date has been the lack of actual planning and funding to deal with the opioid addiction epidemic. It is worth noting that the Council of Economic Advisors has placed the cost of the opioid epidemic at $500 billion per year.

Announcing its Budget Proposal, the administration said it wants to add $13 billion over two years for the US Department of Health and Human Services (HHS) to address the opioid epidemic — $3 billion in the fiscal year 2018 and $10 billion in the fiscal year 2019. Congress already promised the additional $3 billion for 2018 and $3 billion for 2019 in a recently approved budget deal. The Trump administration wants an additional $7 billion for 2019, rounding out the total to $10 billion for the year. HHS’s budget summary said the money will go toward its five-point strategy: improved access to prevention, treatment, and recovery services; more availability and distribution of overdose-reversing drugs (like naloxone); better public health data and reporting; more research on pain and addiction; and better practices for pain management.

The details, however, are lacking beyond that. For example, the additional $7 billion — beyond what Congress already promised in its budget deal — is vaguely described as meant to “support additional work to address the opioid crisis and serious mental illness, including establishing a new grant program for Certified Community Behavioral Health Clinics that provide services to individuals suffering from serious mental illness.”

Unfortunately, the Trump budget proposal includes repeal of the Affordable Care Act and cuts in Medicaid funding. The magnitude of these funding cuts is so great that the budget as, a whole, results in a net cut in funding for available treatment for those with opioid addiction. 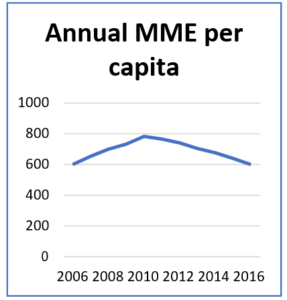 Fed Up! will be keeping close track as the various measures make their way through Congress.
In the midst of all this, there is some good news.
First, prescriptions for opioids have been on a steady decline since 2010. We have a long way to go but there is an increasing shift in the way physicians are dealing with both acute and chronic pain.
Opioids prescribed per capita peaked at 782 MME in 2010. The most recent data (2016) shows a drop to 599 MME per capita, a decrease of 23.4%. We are now down to the same level of prescribed opioids per capita as in 2006. 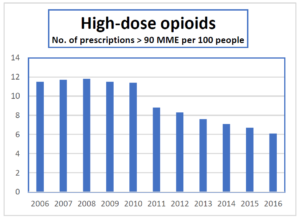 Probably even more important is that the message that opioids are dangerous has been getting across to high school kids.

As you can see in the charts below, both heroin use and nonmedical use of prescription opioids have been on a steady decline for the past 6-7 years among high school students. 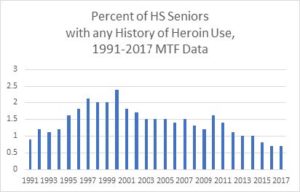 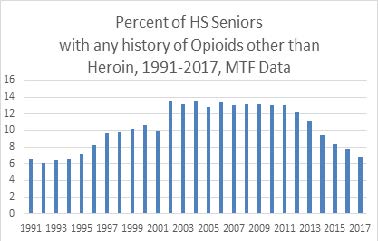 It is our goal at Fed Up! that the US Government should take all action necessary to bring the opioid addiction epidemic to a speedy end. Please see our 2018 Platform for an update on the main targets of our efforts.